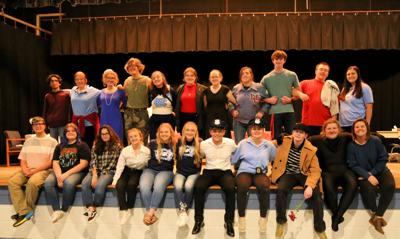 After over 20 years without a drama program in Lynchburg, the newly revived Moore County High School Theater Club debuted this weekend with It’s a Mystery, y’all!, a rewrite of Clue: On Stage, set here in Lynchburg, by MCHS English Teacher Mr. Caleb Poston.  Spearheaded by MCHS’ Mrs. Brooklyn Turner, she held a planning meeting for the students interested in the Theater Club last January, and auditions were held for It’s a Mystery, Y’all! at the beginning of this school year.  Mrs. Turner enlisted Mrs. Cortney Hardin and Mrs. Jana Brown to help as co-directors, and the theater students have had a great time planning, rehearsing, and producing a play.  According to Mrs. Hardin, the best part is that the club is a new and different opportunity for more students to get involved in.  “There are kids on the cast that prior to theater, I had never seen smile or heard even 10 words from.  These same students are now putting on a full length show and performing for audiences!  It’s all gone better than we could have ever imagined,” Mrs. Hardin said.

Opening on Friday night, the cast, crew, and advisors has set the modest goal for themselves to sell 100 tickets to their play.  Over 90 were sold just for the Friday show, with two more showtimes on Saturday! Over 230 tickets were sold in total.

Mrs. Turner has a goal to put on a play in the fall and a musical in the spring each year.  Her sights are set on Annie for the upcoming spring production!  Mrs. Turner shared that she is very proud of the MCHS Theater Club and their performance over the weekend.  She especially wanted to thank Mr. Poston for drafting the local rewrite of Clue.